No excess profits for offshore wind farms in 2022

All eight wind farms in the Belgian North Sea have been fully operational since December 2020. This means that 2022 is the second year with fully installed generation capacity for this major Belgian power plant. During these two years, the annual production of green electricity has remained relatively constant: in 2021, a total production of 6.8 TWh was injected into the Belgian power grid, and it is estimated that production will reach 6.6 TWh in 2022. This corresponds to the annual electricity needs of nearly 2 million households, or about 8% of the total electricity demand in Belgium.

The Belgian offshore wind farms have a total capacity of 2,262 MW, which corresponds to an average production of about 8 TWh of electricity per year, or about 10% of the total Belgian electricity demand. In the last two years, the operational availability of the wind turbines was good, which means that the lower than average production is mainly due to a lower than expected wind supply. Western Europe has indeed experienced a large number of long periods with stable weather and low wind speeds (e.g. during the summer months).

Nevertheless, wind farms remained available and thus producing electricity more than 90% of the time this year as well. Despite lower wind speeds, wind farms are expected to narrowly miss the 2021 production record (6.77 TWh) in 2022. 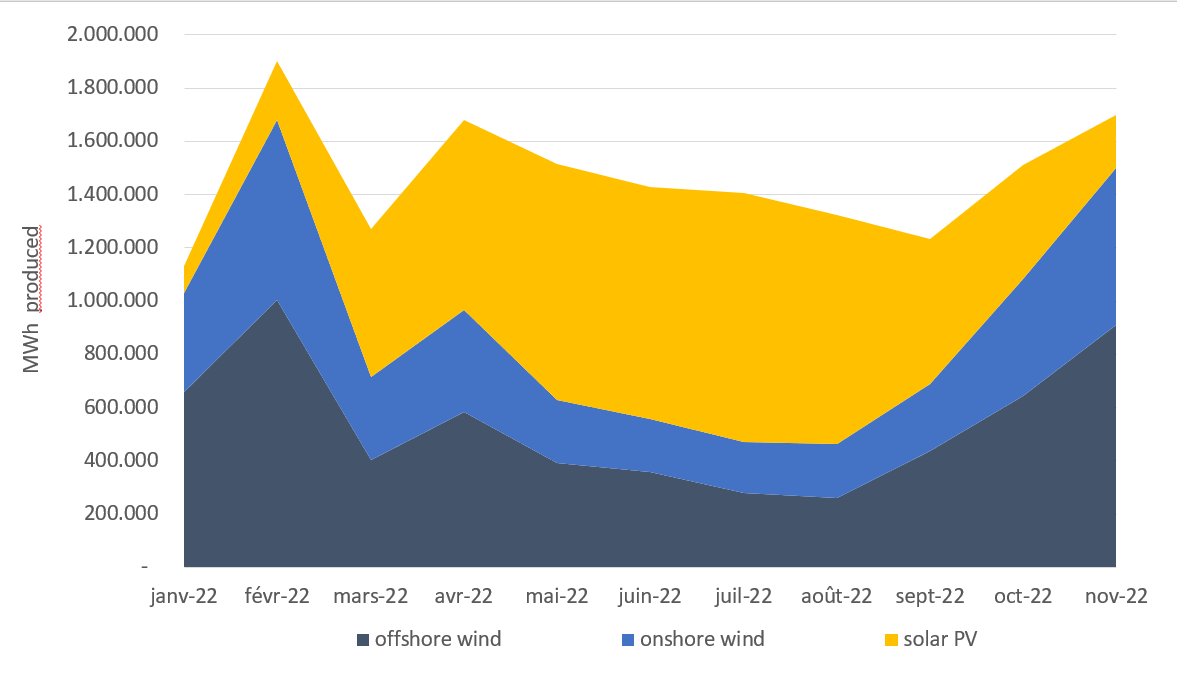 No excess profit for offshore wind

In the context of the energy price crisis, the CREG, in its study on the persistence of high market prices for gas and electricity (13 September 2022), reaffirmed that Belgian offshore wind farms did not make any extra profit in 2022.

The first four wind farms, which were developed and built between 2009 and 2014, have a system of fixed support on top of the electricity price. These wind farms have entered into long-term sales contracts (PPA-Power Purchase Agreement). Price increases on the electricity market have no direct effect on revenue for these farms. The CREG therefore finds that these wind farms do not make exceptional profits.

Furthermore, a lower volume of electricity could be produced in 2022 due to lower wind speeds. As a result, the amount of electricity sold was also lower than normal.

The more recent wind farms (after 2014) fall under a variable support scheme. For each farm, a LCOE (levelised cost of electricity) is determined, a guaranteed price per MWh produced. If the income from the sale of electricity is lower than the LCOE, this is compensated by a government support scheme. The higher the electricity price, the lower the support. The LCOE takes into account an allowance for industrial risk and a fair profit margin for the investor.

The CREG expects that the subsidies received by the LCOE wind farms will disappear completely. This means that the cost of the offshore surcharge on electricity bills will decrease. Some farms will therefore become completely support-free.

New in 2023: adjustment of the support mechanism for offshore wind power

In the context of the energy price crisis, the government decided today to ask offshore wind farms for a structural solidarity contribution from 2023 onwards, and for the entire duration of the support period (up to 16 years). The revenues from the sale of electricity produced in the Belgian North Sea will be capped with the obligation to hand over these revenues to the government to be returned to the consumer. Wind farms will thus make their contribution to lowering the electricity bill.

As socially responsible Belgian companies, the wind farms agree that they too can do their bit, and not only for 2023, but for the entire duration of the support period (until 2036 for the most recent wind farms).

This government’s decision is the result of a constructive dialogue between the government, the regulator and the wind farms concerned. It is fully in line with a long-term vision in which the offshore wind sector has an important role to play in the supply of renewable energy at an acceptable cost.